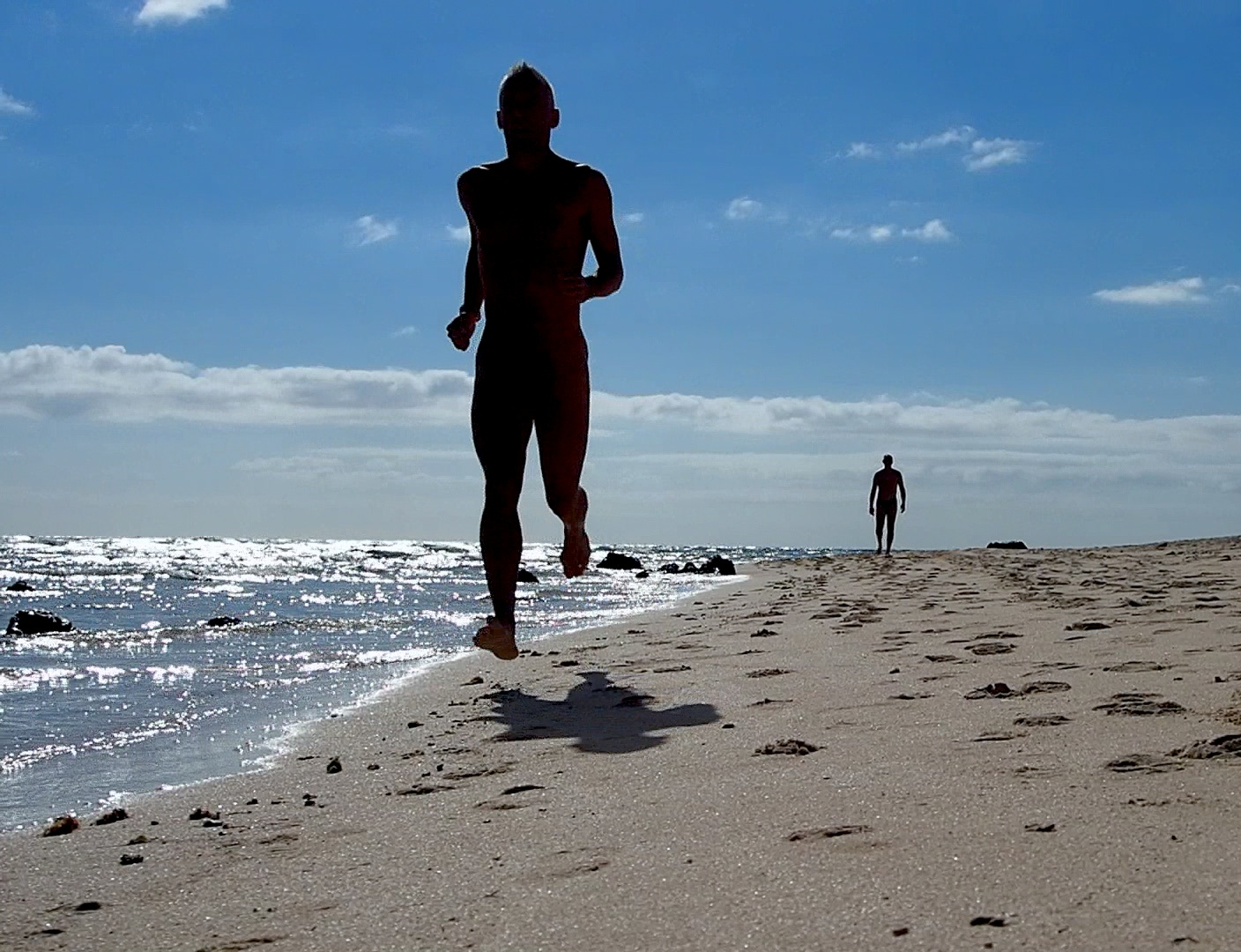 This was the second of my naked running dedicated holidays at naturist resorts. (The first was Naked Run 3: Mallorca). Wow, what an experience Fuerteventura was!

Spain is a haven for naturists as there is apparently no law against public nudity. Social acceptance and politeness, however, dictate that naturist activities are generally limited to certain areas.

However, as I learned from a Canary Island local, apparently while Franco was dictator and introduced draconian restrictions on many activities – including public nudity – the Canary Islands, as a semi-autonomous region, were not subject to the same limitations on personal freedoms. This atmosphere has been carried forward decades later.

What I found in Fuerteventura is an island where the history, the geography, the climate and the social attitudes have combined to create a naturist-friendly atmosphere (there is a huge, visible hippy/surfer subculture I haven’t noticed on the other Canary islands). No, you won’t find anyone walking down the streets of a village or a town nude. But you can comfortably go about your naturist activities on any reasonable beach and probably in the hinterlands as well, as you would only encounter the odd goat. I did a hike up a volcanic cone, naked for part of the walk.

But, I digress; this is a blog about naked running!

My sunrise naked running started on Mallorca. When I woke naturally with the sun, I was keen to run. What I discovered was that my body loved this way of getting going and the atmosphere/environment was more suited to the experience I searched for: quieter beaches, fresh sand, low-intensity sun, reasonable temperatures. So, I carried on this nascent tradition in Fuerteventura. My naked running began the first morning at 07:00. It was high tide. I had to get past an area of volcanic rock before I could shed my running shoes. I hid them behind some scrub and set off barefoot. Initially I had to cross over the dry, soft sand to reach the water’s edge. That fire in my belly was already ignited. This was amazing.

Until I hit the water’s edge and started running on the firmer sand with the water lightly lapping at the soles of my barefoot feet. When I got to that point I burst into joyous laughter…

This isn’t simply about running naked. This isn’t simply about running barefoot. For me, the key to that indescribable feeling is running at the water’s edge. It is that combination of complete barefoot nakedness, rapid movement and water that releases everything the body, mind and psyche are holding onto. I’ve never been a big naked swimmer (until the pleasure of a quick dip now after a naked run), but I can now see the appeal. For me, swimming in no way matches the profound experience of running (the chase, the escape), but I can certainly now engage with how naked swimming would hold such appeal!

This first run – like all first naked runs in a new location –  was a mix of total excitement, pleasure, concern and acknowledgement of the unknown. How far would I go? Who would I encounter?

Making the first footprints of the day in fresh, damp sand, as the sun rises over the water… All of the best clichés apply! Do I feel like Adam, the only man alive? Am I chasing my prey? This isn’t simply an innocent morning run. It encapsulates so much more of my identity, so much of my maleness, so much of my existence. My footprints leave a temporary trace of my presence, so swiftly erased by the tide.

I run the length of the beach twice, for a total of just under 5k. As I fatigue – yes, running on sand is as tiring as everyone claims – and decide to go for a quick swim, I discover the water is deliciously warm: a pleasant surprise for the cool Atlantic. And as the sun rapidly rises, bathers and photographers rush to stake their claim on the diminishing expanse of sand.

For the first time ever, that same evening I go for another run. The first time I’ve ever run any distance twice in the same day. This time it is sunset. The morning was so sublime, I cannot resist another go.

However, I am not alone. I am no longer Adam! While the beach is clearly in the process of emptying of the day’s tourists, there are still a number of holidaymakers dawdling there. The beach is an official naturist beach. But parts, closer to a large hotel, are frequented by families and non-naturists. As I run past these area, in what is low tide at this time of day, I get my fair share of gasps, glances, gawks and quite a few photos are taken with the ever-present smartphones. Fingers are pointed. There is a great deal of excitement.

It is strange – I’ve never been an exhibitionist; quite the contrary – but knowing a few people are watching provoked me to run taller and faster. I hate to admit it, but I could feel it happening without trying: I was ‘playing up’ to the assembled beach-goers. I sprinted a bit; I stretched my spine taller… Who have I become?

The answer to that provocative question will have to wait. Time for another naked swim.

I had pushed myself too hard the first day.

I woke the next morning, expecting to run the sunrise again. But, alas, it was two hours past sunrise. I was exhausted and my body had said ‘no‘.

Not only had my body in general revolted, my feet were a mess. When I had run daily, barefoot, in the sand on Mallorca, I had felt no ill effects. Here, in Fuerteventura, the outcome of the first two runs was a number of blisters, particularly on my two big toes. There was something different going on here. Was it the frequency (two runs in less than 24 hours) or was the sand sharper or harder (volcanic stone?)? Who knows. In any event, my next beach run was postponed by over 24 hours.

That day the expected barefoot run on the beach was replaced by naked running – with shoes – in the dunes: Naked Run 6.2: Fuerteventura (Dunes).

Over the following five days I managed to run at least once daily – either sunrise or sunset- barefoot on the beach. My feet wouldn’t permit double runs. It was with great pleasure that I met another naked runner at my hotel near the end of the stay and he joined me for one sunrise run before I departed for Gran Canaria.

On my final morning, setting off on the beautiful virgin sand I was shocked to see fresh barefoot running prints stretching out ahead of me. Someone had beat me to it! I was the second person on the beach that morning. Was the other runner naked (as potentially indicated by the bare feet)? I went on a deliberate – but not particularly speedy – chase to find out. Who was this Adam?